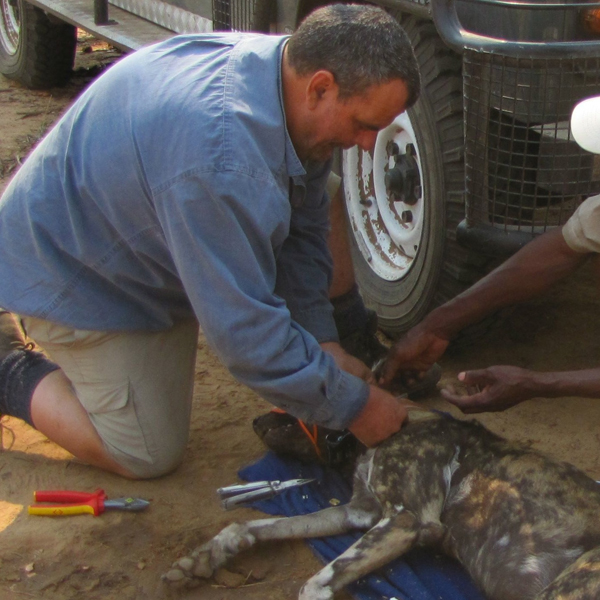 Dr Greg Rasmussen grew up in Zimbabwe where he developed a strong affinity for wildlife to the point of spending all his spare time in the laboratories of the Natural History Museum. He then joined the British merchant Navy, and studied in Southampton at the Warsash Naval College as well as travelled the world. Even on the ships he took an interest in research, and in 1978 for his work on ocean currents in the Atlantic received the Bracknell (UK) award for meteorological work. He returned to Africa and completed two more degrees in order to pursue a wildlife career.

In 1989  he started researching the endangered painted dog. He also started to engage with ranchers who were shooting the dogs and stopped the killing. He is one of the few conservationists to ever achieve this goal. During those early days he had a vision for an all-encompassing conservation project that dealt with ecological as well as socioeconomic issues that impinged on painted dogs. With this vision, he founded Painted Dog Conservation that grew to be model for conservation incorporating conservation education for children as well as community benefit and participation thus achieving meaningful conservation.

Recently (2014), with another vision in mind, Dr Greg left PDC, and founded Painted Dog Research Trust. Under this umbrella, Dr Greg will continue with his lifetime’s research into Painted Dogs, but also is intending to pursue a new vision. Being of the strong belief that good conservation must be underpinned by sound science, establishing Painted Dog Research Trust allows Greg to focus on new bold conservation visions. These include the birth of a field based conservation ecology centre to inspire and train tomorrow’s generation of conservationists. Here whilst simultaneously applying data collected on the endangered Painted Dog, his mission is to mentor young Zimbabwean and international university students.

Dr Greg is a research associate and part time lecturer at the University of Zimbabwe; he is also affiliated with the Wildlife Conservation Research Unit at Oxford University in the UK where he completed his PhD. He has a diverse range of research interests with his most recent interests being trans-boundary conservation.

He is one of the few people to survive a plane crash where he was a day and a half with both legs and pelvis smashed in Hwange National park, and this was so extreme it was made into a documentary in the “I shouldn’t be alive” series”. He ranks highly as both thoughtful scientist and conservationist. He is unswerving in his commitment to conservation as well as to those who wish to become a part of saving nature.