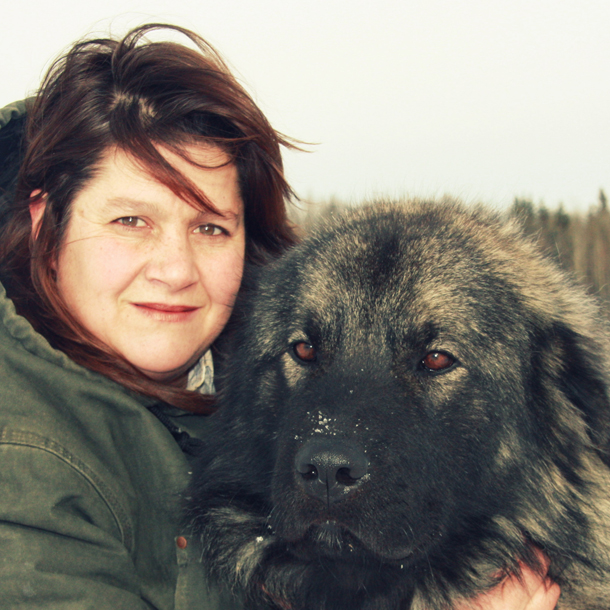 Louise Liebenberg is a rancher, a lover of wildlife, a writer and an amateur photographer. She grew up in South Africa and obtained her Bachelor of Science degree. After University she took her border collie and traveled to Europe and the UK, to work on various sheep farms. She met her partner Eric, in the Netherlands and together, started a shepherding company grazing nature areas, dykes, parks and military areas. They started the first Shepherding school in the Netherlands and had multiple flocks and shepherds doing a variety of grazing projects throughout the country. They direct marketed organic lamb to butcher stores.

In 2008 they emigrated to Canada, where they now ranch. They run a commercial and purebred Angus Cattle, Sheep and raise Brabant horse’s.  They own no gun and have never needed to use any form of lethal measures to prevent predation. They were the first ranch in Canada to be certified Wildlife Friendly and Predator Friendly. They ranch in an area, that has many large predators including wolves, bears, cougars and coyotes. They have utilised Livestock Guardian dogs since 1992.  Louise, writes articles for multiple publications, including the US based “The Shepherds Magazine” where she has a monthly column. She has spoken at various conferences in Canada and Internationally, on Ranching with Wildlife (primarily on conflict reduction between predators and livestock) and on Livestock Guardian Dogs (raising, training, behaviour, problem solving, and any other topics related to the use of LGD). She brings practical ranching knowledge, a passion for working sheepdogs and enthusiasm for wildlife together on their ranch in Northern Alberta.

Lecture:
Using Livestock Guardian Dogs to migrate conflict between livestock and wildlife. Specific traits, behaviours and training will be discussed.