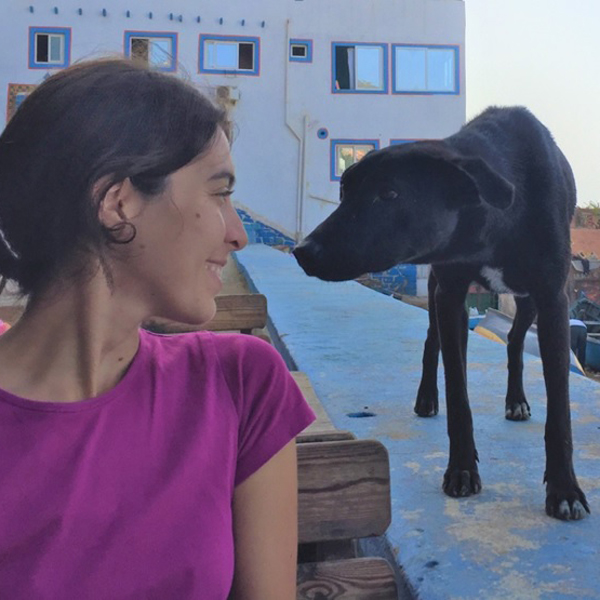 Italy
Differences in reconciliation patterns between wolves and dogs.

Martina Lazzaroni graduated in Natural Science at the University of Milan. She then obtained a second master in dog training at the University of Pisa, conducting a thesis on social referencing in dogs at the Canis Sapiens laboratory of Milan. She started to work as research assistant in a project leaded by Simona Cafazzo focused on post-conflict management in wolves and dogs at the Wolf Science Center (Austria) and at the Olomouc Zoo (Czech Republic). Subsequently, she continued to work as research assistant for the University of Veterinary Medicine of Vienna in a project leaded by Friederike Range and Sarah Marshall-Pescini on social dynamics in packs of free-ranging wolves in the Italian Apennines. In 2016 she obtained the DOC grant of the Austrian Academy of Sciences for conducting a PhD at the Veterinary Medicine of Vienna focused on investigating the effect of domestication and experience on dogs’ behaviours by conducting a series of behavioural and cognitive tests on equally raised captive wolves and dogs, pet dogs and free-ranging dogs in Morocco.

Lecture:
Differences in reconciliation patterns between wolves and dogs.

In social species, group cohesiveness and functionality can be disrupted by intra-group conflicts that arise as an inevitable consequence of competition over resources, mining the survival of all group members.

A common mechanism that functions to mitigate the occurrence of aggressions is the establishment of a dominance hierarchy between group members. However, conflicts do inevitably occur in social groups and post-conflict management strategies have evolved to allow subjects to cope with their negative effects. Reconciliation is one of the most common studied post-conflict management strategies and consists in the occurrence of affiliative interactions between victim and aggressor soon after the end of a conflict.

Reconciliation has been hypothesised to reduce stress levels of former opponents, to reduce the risk of further aggressions and thus to repair the disrupted relationship between the dyad. Due to this important role in maintaining pack cohesiveness it has been suggested that reconciliation should be more frequently observed in species that strongly rely on cooperation to survive and reproduce.

Wolves (Canis lupus) and domestic dogs (Canis lupus familiaris) are particularly interesting species in which to compare patterns of reconciliation. In fact, while wolves are a good example of an extremely cooperative species, dogs instead appear to be ‘facultatively social’. Wolves typically form cohesive family groups that strongly rely on cooperation for hunting, rearing pups and defend the territory. Dogs instead can live either as solitary or in groups. When living in groups they might not constitute a family but an aggregation of unrelated individuals that usually feed by scavenging on refuses and do not highly depend on each other for survival.

In this talk, I will present the results of studies on reconciliation conducted on different groups of dogs and wolves living in captivity and on free-ranging dogs. I will focus on the comparison between wolves and dogs, highlighting how the differences in their social structures, which are the result of their different ecologies, might result in the differences observed in the patterns of reconciliation.